Transient Electromagnetic Method [TDEM] - General information and principles of use

The measurement depth ranges between a few and more than 1000m. Measuring depth depend on the size of the used transmitter’s power transmission loop; and the strength of the interference caused by the environment.

The measuring unit consists of a transmitting and receiving system. Measurements are based on the induction of an electromagnetic field into the Earth using an inductive loop or galvanic source (LoTEM). When electromagnetic waves meet different geological layers, eddy currents are generated which in return create a secondary electromagnetic field. These waves are then recorded at the surface by a receiving loop. On the basis of these registers it is possible to calculate the conductivity distribution of the geological medium.

The advantage of the TEM / TDEM method over the electrical resistivity method [ERT] is the absence of long electrode systems, usually with a length three to five times greater than the desired exploration depth. A much smaller measuring system in the TDEM method has a reduced sensitivity to lateral changes of the geological medium.

TEM/TDEM methods have been used to explore minerals for over half a century. Currently, they are used in an extremely wide range; among others, to identify aquifers, including thermal waters springs, to locate structures related to the occurrence of hydrocarbon and metal ore deposits, or in engineering and environmental research. 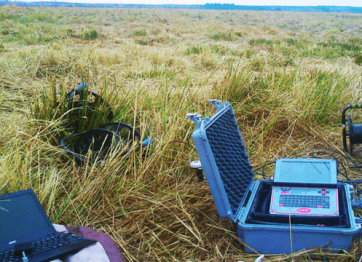